Does Mack Have A Baseball Team ….Finally? 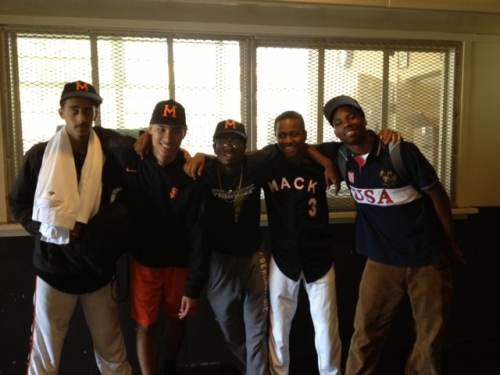 Despite the rough start — two games forfeited because of delayed paperwork — McClymonds High School has its first real baseball team in five years.

In the past, it could not muster enough eligible players to have a full season.

And this group of guys is having fun.

“There’s more laughter than on the basketball court,” says Tugman, who played pre-season but is currently ineligble.

Unlike Mack’s other renowned team — its football team has won three back-to-back Silver Bowls and its boys’ and girls’ basketball team placed first in the Oakland Athletic League — the baseball team’s players are greener. Only six of them have actually played on a team before.

“Our strategy is teaching fundamentals of the game,” says coach Keith Britton.

The team beat Fremont 8-0 and lost a close game to Castlemont 8-7. A crucial test will be Friday’s game against Oakland Tech.

But that is not the point for this team.  Britton emphasizes teamwork, dubbing every member of the team “Superstar.”

“Individual stats may be important for scouts, but right now this team is aiming for the W [win],” says Tugman.