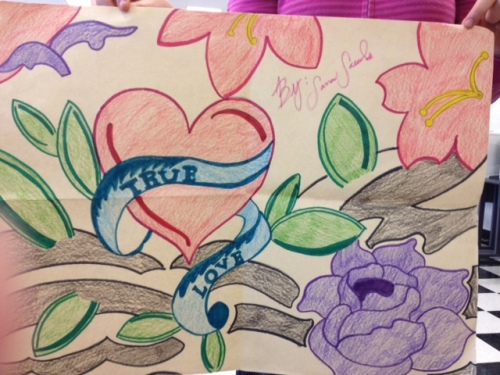 drawing by Sana Saeed who prefers not to be photographed

by Khristan Antoine and Kardel Howard

At 15, Sana Saeed is McClymonds’ youngest graduate and the first valedictorian who is non-African-American, Muslim and covers her head.

As co-valedictorian along with Iakiriyya Karimushi, she addressed the class of 2013 and guests about Stars Can’t Shine Without Darkness.

Her smile is infectious, radiating gentle humor mixed with kindness. Yet, often hidden under her friendly exterior and her elegant head covering, stylishly modified with a gem or chic pin, Saeed argues fiercely, boldly tackles controversial issues — whether about immigation or gun violence — and fits into McClymonds High School as seamlessly as any other student.

“Getting it right, getting it done,” is what propelled Saeed to a 3.85 GPA, said Dr. LuPaulette Taylor, who teaches AP English. “She’s up for challenges and never gives up.”

Junior Darlisha McGlothen describes Saeed as always curious and challenging.”Sana always answers a question with another question, usually pushing you to think more deeply”  McGlothen said. “In one discussion, I finally asked her, ‘Sana, what do you think?’ and she smiled and answered, ‘What do YOU really think?'”

Like her sisters, Saba and Esma, Saeed devoted much of her energy to academics. She is the first valedictorian in the family and the youngest to graduate, though Saba was 16 and salutatorian.  Sana is also the first to be involved in journalism, as a reporter and writer for macksmack.

Saeed researched scarves as her senior project. She was accepted to California State University/East Bay and plans to study nursing.

Earlier this month, Saeed received a $1,500 SuperStar scholarship from Burma SuperStar, which was presented by Oakland Mayor Jean Quan. She was one of two McClymonds seniors (out of five winners)  to receive the scholarship.

“This is so exciting,” she said at the time.

Some of Sana’s pieces:

Cyber High on Hold: Will College Coordinator Be Replaced?

Is My Lipstick a Lethal Weapon?

Warrior Gets A Facelift

Are you social or studious? Your favorite floor at Mack provides a clue

Here’s the profile: talker, sagger, whistler, rapper, texts while he walks, dawdles in the hallway. Conclusion: definitely fits the personality of a 2nd floor guy.

She’s different: still half asleep, in need of caffeine or a pick-me-up, doesn’t want anyone to ask about her business, avoids confrontation, prefers not to flirt, doesn’t walk too quickly.  Probably prefers the 3rd floor.

Students at McClymonds often engage in a heated debate: about which floor is best:  “Which floor do you prefer?”

While most argue that the second floor is more convenient and social, others prefer the third floor because it is more quiet and also practical: it’s where most classes are scheduled.

So the  question is: which floor do more people prefer? I asked around to see what students and faculty think.

To some students the 2nd floor is more convenient  for a plethora of reasons.”The 2nd floor has the most teachers and we could be taught more and learn more than on the 3rd floor,”  said Luckie Lovette, a junior.

“I like walking down the 3rd floor hallways and seeing the art that goes on the lockers;  also it is more peaceful and quicker to get to class than on the 2nd floor.”  said Danny Cox,  another junior.

Besides the much desired stillness of the third floor,  students claim their allegiance to the top floor  because of the limited presence of security guards (SSOs), principal and vice principal who seem to enjoy roaming through the hallways of the second floor.  No SSOs , no way to get into trouble for any reason.

However, students who like to socialize with their friends prefer the second floor despite increased supervision.

“I’m willing to risk that and talk to my friends because they can’t really control us.” Andre Price, Junior, stated.

Four students will speak at graduation: now who’s the keynote?

The class valedictorian, Denzale Johnson, and three other seniors — macksmack editor Pamela Tapia, and basketball players Miriam Neal and Darryanne Vance, will speak  at graduation on Thursday June 16. The theme will be  “Facing Challenges and Embracing Opportunities.”

It is unclear who the keynote speaker will be.

Mack students apply for Obama to speak at graduation

That cry rang through the hallway. Enthusiasm. Excitement, Hope.

“That’s what we need to keep us motivated as young Black men,” said Josh Walters, a senior at McClymonds.

Last Friday, McClymonds students worked hard on deadline to submit their official application to the White House to have President Barack Obama speak at the graduation for the class  of 2011 on June 16.

Students were literally speechless and astonished when a group of students announced that they had applied for President Obama to speak at graduation.

The essays included a section on how teachers prepare you in academics, why your school deserves to win and how McClymonds prepares students for college and careers.

Students focused on their involvement in the community, which is predominantly Black and low-income, especially its advocacy for environmental justice. The school was featured in Newsweek Magazine and recently won an award from the Environmental Protection Agency. Senior Terranisha Nathaniel won the Princeton Prize in Race Relations in 2010 and McClymonds sent its top debater to nationals last year.

In the essays, students also mentioned the school’s consistently winning basketball and football teams. It noted that it is the only high school in the country with two living Presidential Medal of Freedom winners, Bill Russell and Frank Robinson.

“We don’t have the same funding as other schools in the district because of our small size,” the students wrote. “Yet we are the movers and shakers.”

Miami Dade College in Florida has already announced that it will host President Obama as one of their 2011 graduation speakers. Miami Dade’s press release about snagging the nation’s top official doesn’t tell how they did it, but states it is the largest higher education facility in the U.S., with more than 180 countries represented in their student body