Speaking Up: what youth centers in West Oakland should provide

San Francisco Chronicle reporter Chip Johnson blamed problems with youth centers (two open and a third about to open)  in West Oakland on lack of  staff and programs.

Journalism 1 decided to pitch in, providing insight into what should be included in local youth centers and what also needs reform.

“We should have more programs at school instead of at youth centers, because it’s easier for students to get their SAT prep,  help on their homework or class work right here.” (Abbas Hassan)

“More music, dancing, singing, college. Students are bored after school. So they need something to do. If you have these programs then the kids won’t need to do drugs or harmful things like that.” (Jaden Nixon, who transferred out of McClymonds)

“I’m happy with the programs that Oakland has to offer me. I can go to the YMCA on weekends and the Boys & Girls Club on weekdays. They have sports for you to play and they’re very safe. The programs are kind of healthy but you can get good exercise. It keeps the violence away. (Parrish Kendricks)

“I would like to see fun programs. Also educational programs that will help us in the long run. For example, a program that teaches you useful things like how to write a resume, fill out a college application and things like that. I would really like to see tutoring programs also.” (Hailey King)

“We need more fine Arts and Educational Programs because there are a lot of talented kids I know around Oakland that don’t get a chance to show their true talents, and then they get caught up in gangs, drugs, and violence.” (J’Mya Gray-Martinez)

In Oakland,  I believe we need to provide more programs during school hours so students are forced to go. (Quaylin Wesley) 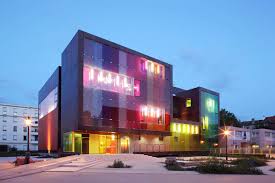 There are a lot of kids in Oakland with great potential, but usually don’t get a chance to because they get caught up with things they shouldn’t be doing. Having more community programs in Oakland would help most of us be able to express ourselves in different ways.

Back to the future: the secret world of BART

Story and photo by Anthony Beron

It was a glimpse into the future of BART: its new, New Zealand-designed  40-mile an hour cable car that’ll zip riders to the Oakland Airport.

About 35 McClymonds’ STEM (science, technology, engineering and math) students were treated to a behind-the scenes tour of BART (Bay Area Rapid Transit), along with a cameo on local TV news Tuesday.

“We learned how trains function and all the careers associated with BART,” said junior Kardel Howard.

The trip was organized by BART and Kathryn Hall, who heads the STEM program at McClymonds.

Why I miss San Francisco

I miss the views. Stunning vistas, dotted hills, the blueness of the Bay, Ocean Beach with its limpet shells and sand dollars.

And then there’s the mobility of living in San Francisco: the buses are cheaper and it feels safer, less violent.

On a typical morning on Potrero Hill, I could jump out of bed and race down the street to Potrero Hill Neighborhood House to take a Zumba class. It’s high energy dance with samba music, Latin jazz, Cupid shuffle. Cafés like JB’s Place open in the wee hours. People mill around Safeway on 17th and Potrero street.

My neighborhood in north Oakland (ice city: “we ain’t no squares we polar bears” Mistah Fab) is less lively and more dangerous. There’s a gang injunction that limits the freedom of lots of youths and people in their 20s in your neighborhood.

My job in San Francisco was where I danced — helping people do the homework and teaching hip hop dancing. I combined strong academics — I don’t even have Spanish this year. And although the pay is the same, my after-school job in the East Bay is in San Leandro, an hour and a half from my house.

It’s fun living in north Oakland, but I also miss all of  my friends and family, and on top I miss being in the hood. I miss going everywhere and knowing everybody.

The floors of 226 were waxed, the equipment shined, the bright posters hung as McClymonds prepared to kick off its new STEM (Science Technology Engineering Math) curriculum at a meeting tomorrow at 5:30pm in the Malcolm X room on the 2nd floor.

“This program is supposed to enhance engineering learning by providing hand-on experiences,” said Kathryn Hall, engineering and math teacher at McClymonds, about the program developed by Project Lead The Way.

Hall has been teaching a STEM elective at McClymonds this year. Kardel Howard, a sophomore (who will be there tomorrow) said that he enjoys the computer work, which helps him learn about himself. “Our teacher is not yet able to answer all our questions, but that’ll change,” he added.

In addition to students taking the STEM class, speakers are to include Principal Kevin Taylor, Oakland superintendent Tony Smith, Janet Auer from Chevron Global Partnerships and Programs, and Duane Crum of Project Lead The Way.

“I’m hoping that in the next couple to years, people will be hearing about our engineering and robotics programs,” principal Kevin Taylor told The Oakland Tribune.

On its website, Project Lead The Way says its curriculum reaches 500,000 students in over 4,700 schools in 50 states.

Robert Boege , executive director of Alliance for Science and Technology Research in America, told macksmack that West Oakland was selected after U.S. News and other media groups identified those schools that needed STEM the most. “The future economy will be dependent on our youth,” he added.

About 60 people attended the forum, including first-time voters like senior Carlos Valladares. “I sense that all  these candidates want to make West Oakland a better community,” said Valladares after the forum.”Tough choice.”

There were few disagreements, unlike the second debate between President Barack Obama and Mitt Romney. One candidate — Lynette McElhaney — left early and school board candidate Richard Fuentes could not attend because he had to work (for the Oakland City Council). City council candidate Alex Miller-Cole said he would be “one politician whose cell phone number you have” and candidate Larry Lionel Young Jr. stressed that he understood youth issues better because he was young.

The political forum grew out of interest by students participating in Alternatives in Action’s YOLO Youth Organizing Leadership Opportunities. Senior Donte Jackson asked many of the questions about safety, violence, jobs, a proposed teen curfew and McClymonds’ future.

The candidates are competing for Nancy Nadel’s seat. Nadel announced that she would step down after four terms representing West Oakland.  All contenders describe themselves as liberal or progressive. They all support community policing and oppose gang injunctions, and youth curfews.

Also speaking were school board candidates, incumbent Jumoke Hinton Hodge and challenger Benjamin Lang, who said he was the only candidate who has spent no money on his campaign and has accepted no donations. Candidate Richard Fuentes, who has the support of the teachers’ union, could not attend.

Among the more striking statements, Sullivan said that better lighting in Emeryville made the streets there safer and cleaner. And Young kept using slogans to push his candidacy. “Vote LL: Oakland will be well.”

Commit A Crime, Get A (Summer) Job

The Mayor came. The Mayor promised jobs, but she didn’t hire me- she is hiring convicts.

A couple weeks ago, Mayor Jean Quan and representatives from city departments came to McClymonds to hire students for the summer jobs. It was a Wednesday, so students got out early.

A man named Bill told people to fill out their information on a sheet of paper and then to speak to different people. Students stayed who really wanted the job stayed, but mostly everyone left. It was a good opportunity for most students because they came to hire people on the spot.

They had different people or jobs depending where you live or how far you can travel. So that was also a good opportunity. What I didn’t like was that they were giving students the run around after they filled out every paper.

As I saw it,  there weren’t enough opportunities and they were also supposed to be hiring on the spot, but they didn’t.

To me that was so rude, very silly, considering that they came to us to apply for their summer job at our school. I never even had a run in with the police. It’s also discrimination: I can’t get a job because I basically don’t have a criminal record! They should have had a side for people on probation and a side for people who are not on probation.

Basically they were racial profiling because we are an all black school. Everyone who goes to McClymonds is not on probation, and they should not base summer jobs on whether you are a criminal or not.

It’s very uneducated to approach a person and say “Hi I am Whitney, I am a felon on probation, and I would like to apply for a job with your company.”