In and Out of Shadows: A Play About Undocumented Youth Hits Home 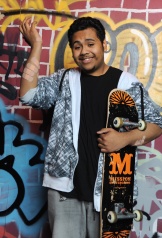 Watching In and Out of Shadows at the Marsh Theater in San Francisco was like sitting in my living room listening to my Mom. The Filipina mother in the story threatened like my mother, giving you a choice of what household instrument you can get hit with.

It hit home because I’m Filipina and these life stories — focused on fears about the police, stress over grades and college — reflect the anxieties of my undocumented cousins and friends.

Some significant details are different of course. The stories of crossing the border into the United States from Mexico, when one kid had to be drugged because he could not learn his fake name,and another had to crawl through the sewers, are harrowing.

The musical builds on a familiar theme: college application.  In it, the undocumented teens are preparing their personal statements for an AB 540 conference at UC Berkeley (AB 540 allows DREAMers to attend California colleges at in-state rates).

We meet Angel, who arrived in the US alone via a sewer when he was 13. And Juan who, as a determined six-year-old, had to be drugged with cough syrup during the crossing because he adamantly refused to take his cousin’s name as his own. We watch a newly urbanized “vato loco” (crazy dude in Spanish) teaching an undocumented Chinese friend how to speak street Spanish.

Running through the entire musical is the fear of deportation. Many families in the  play  have deceptive status – undocumented parents who lie to their children about their papers (often telling their children they have papers, when they don’t)  and who live in constant fear of separation.

Even under AB 540 or President Obama’s recent two-year deportation deferral program for certain undocumented youth, students who get to stay may suddenly be left alone with nobody to take care of them. The diverse group of young actors, many whom are directly affected by the issue, mix English, Spanish, Tagalog and other languages as they examine the unwieldy human effects of this messy political issue.

Inequality: Why Mack Needs To Be More Academic

Will there be more academics at Mack next year? I certainly hope so.

Even though I was admitted to Cal Berkeley, I would have welcomed more AP classes, such as the ones proposed now by McClymonds alumni and the New McClymonds Committee. They proposed adding two AP history courses, two English courses, AP Calculus, AP Spanish and three AP science classes, as well as Environmental Studies and three computer science courses.

I would have benefitted greatly; these classes would have given me the opportunity to satisfy Cal’s requirements. Unfortunately, there was only one AP class available in my four years at McClymonds — AP English.

As these groups point out, we students at Mack are getting an unequal education — fewer AP and honors classes translate into lower skills, lower GPAs as we compete for college admissions, scholarships, and fewer opportunities. We also have fewer courses to choose from: 21 courses at McClymonds, compared to 72 at Oakland Tech. And we are the only high school in Oakland that is overwhelmingly African American.

As I look around me, I see students struggling to graduate because they are missing required courses, partly because they dropped a course along the way or never found a science course they liked.

However for the most part, some students can’t take the course because it is full. Consequently, these students will have to attempt to satisfy the requirement next year.

Personally, I took Pre-Calculus my junior year, but was unable to take Calculus in my senior year, because we do not offer the course. The pickings are scarce. I’ve seen the offerings shrink in my four years here: Environmental Science, Forensic Science, Media Studies, Video Production, Drama, African American Studies, and the closing of the Law Academy.

For the second year in a row, Mack wins Silver Bowl

with stats and play-by-play  from MaxPreps and Oakland Tribune

Despite a younger team (only 7 seniors) and a close first half (score tied at 13-13), the McClymonds Warriors  scored three touchdowns in the second half to win the Silver Bowl Friday over Skyline by 33-19.

This was the second consecutive Silver Bowl victory  to which quarterback Eddie Heard  led the Mack team. The team finished 9-2.

Senior running back Harold Halcomb III ran for 162 years and two touchdowns including the go-ahead touchdown in the fourth quarter, according to news reports.

After that play, Skyline attempted a lateral, which was fumbled and recovered by Mack’s Jason Brooks for a touchdown, stretching the lead to 25-13. A similar play led to a  40-yard run and touchdown by Lovell Samuels, making the score 33-13. Coming off the field, the Warriors were all smiles. One said, “We got this game.”

But Skyline quarterback Jamal Mayo managed to run for a touchdown, his second in the game, to make the score 33-19. The game ended with another interception by Eddie Heard.

Several Mack grads who had played football rushed onto the field, including Denzale Johnson, now a freshman at the University of California at Berkeley. Johnson was part of last year’s squad  finished the season undefeated 12-0, with the only other school to do so, Skyline in 1997.

“Skyline has a great program, they came prepared.  Now we are going to enjoy the victory, come February it’s back to the weight room, ” said Coach Curtis McCauley.

McClymonds has won four of the past six championship games and adds another Silver Bowl title to its collection of six, second behind Skyline, which holds 16 titles.

OccupyCal: A Mack Grad Protests and Speaks Out

Denzale Johnson, 2011 valedictorian, Mack football player and freshman at UC Berkeley,  was in a San Francisco Chronicle photo of a  demonstration on campus with OccupyCal. He comments:

“I want to educate my friends. I was there to protest an economic system that is corrupted and flawed. It’s a big issue: that 1 percent of the population is accumulating wealth, while 99 percent suffer.

“Tuition is going up 81 percent and it’ll be harder for my younger siblings to have access to a UC. The whole student body was out there. If we don’t step up, who will change the system?

“Mack helped me articulate my position, speak up for myself.”

“It wasn’t my first time [at a protest this year]. I stood out there in the affirmation protest against the Bake Sale [racist sale of cookies for reduced prices], lay out in black in front of Sproul Plaza, letting them know that they can’t walk over us.”

Six students from McClymonds are among the 60 or so Oakland students selected for paid four-week summer internships through the city of Oakland’s  Mayor’s Office.

Students from the other high schools in Oakland will intern with businesses as diverse as Kaiser Construction, Metropolitan Golf Links, East Bay Zoological Society, More Radio, and KICU television.

In the past, as many as 250 students were selected as summer interns. “There is limited funding this summer for job slots,” said Cara Johnson, afterschool program coordinator at McClymonds. “The first place to cut in the budget is always programming for youth.”

It was a first at Mack: a signing ceremony for students who were committing to graduate college.

And it  had nothing to do with sports.

At a time when violence and chronic absenteeism dominate the headlines about West Oakland, seniors celebrated the college-going culture at McClymonds on Thursday. With balloons, flowers and speeches, student leaders conducted the first McClymonds College Signing Day, at which all but two seniors pledged to attend college, finish college, and give back to the West Oakland community.

Students had a chance to thank their families and mentors for help in the application process.

Denzale Johnson, the event organizer, co-captain of the football team who was admitted to UC Berkeley on an academic scholarship, thanked his classmates for their participation in the event.

“I’m choosing to go to college because I want to better myself as a person and better my community,” said Kenya Lee-Fletcher, admitted to UCLA.

Students picked up the pen and signed a letter of commitment in front of students in lower grades, their families, and staff members.

“Finally an event that is for all seniors, not just for the football players,” said Bonita Tindle, admitted to San Francisco State University.

Philadelphia Eagles wide receiver DeSean Jackson was also present at the signing even though he did not speak. 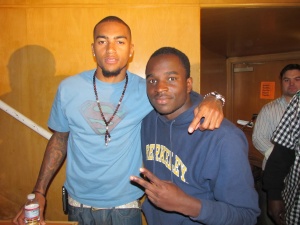 Nobody knew the “back story”: how McClymonds “won” an assembly with DeSean Jackson, Cal’s beloved star, now 24 and a wide receiver with the Philadelphia Eagles.

It was tweeted and Facebooked, announced and whispered and then, he was there.

“He the man” said Shaquille Jackson, a freshman at Mack (no relation to DeSean).

The football star spoke from the heart, talking about his tough childhood living in the Crenshaw area of Los Angeles. He mentioned the violence that he witnessed as a kid and remembered friends he lost to crime in that area. He also touched on the subject of poverty and making a promise to his family about “making it big.”

“My mother doesn’t work for anybody. She works for me now,” said Jackson.

Jackson turned to a more serious tone when he explained that bullying was one of the reasons why he got involved in football.

Eddie Heard, standing 6 feet 4 inches tall and quarterback for the McClymonds football team, jokingly stood up as the crowd chanted his name.

Jackson snickered as Heard sat down. He regained the crowd’s attention by assuring the group that “bullying doesn’t pay the bills.”

Jackson explained the dangers of bullying and mentioned his meeting with a victim of bullying on the show “The View.” He described that the 13-year-old victim was bullied by a group of seven teenagers and one of the offenders filmed the entire assault.

Jackson introduced his brother Byron Jackson, former San Jose State University wide receiver, who spoke about achievements in both of their lives.

“Desire. Principle. Belief. Power. With these principles you can achieve what you want,” said Byron Jackson.

Byron Jackson then showed a film about DeSean Jackson’s football career. The film calmed down the excited students, and ended with an image of Jackson’s loss to the Green Bay Packers in the 2011 playoff game.

“Don’t let anybody tell you can’t do it,” said Jackson.