FLY takes off at McClymonds: boys to men

A boy calls a girl a b**ch after arguing about rumors going around school.  He grabs his backpack and knocks over a desk in frustration.  Before the teacher can stop him and calm him down, the boy is down the hall fuming in anger, swearing at the walls.

The newest guys-only club at McClymonds — First Love Yourself or FLY — addresses such issues of disrespect toward women, confidence and responsibility in a more social atmosphere than the Manhood class for 9th graders, says Lovell Ruffin Jr. , case manager at Alternatives in Action.

The brainchild of Jareem Gunter, community programs manager, the program was launched to help male students talk about these issues, bond and develop self-respect. So far, about a dozen male students, mostly freshmen, are attending.

The reasons for joining FLY range from a desire to bond with other guys outside of sports teams to a need for a safe place to ask questions and get information.

“Some of the guys don’t know how to tie a tie,” said Gunther. “Others need to  respect girls or women.” The current trend — to disrespect women — began 10 years ago and is reflected in rap music and culture, he said.

So far, the focus has been social. But the three adult leaders have written a pledge they hope to teach club members: to honor themselves, to hurt no one, to build community. 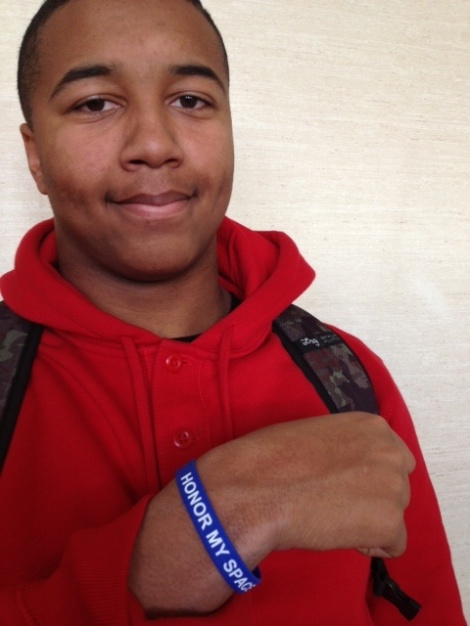 A freshman curses out loud in front of a math teacher in the hallway. An athlete interrupts another student, saying “Just shut up.”

These incidents inspired a core of students participating in REAL HARD at McClymonds to hand out wrist bands last week and encourage students to speak up, listen and respect each other.

The sky blue wrist bands proclaimed  “Honor My Space” while forest green ones spelled out “Speak Up.” About 40 percent of students participated in activities centered around   learning to take turns expressing opinions and acting in positive ways toward one another.

“It’s a way to tell the world that you want to be heard, that you will stand up for what you believe,” said Randall Coleman, 16, a junior.

REAL HARD is an after-school leadership training program that meets twice a week for a two-hour session. In addition to the program at McClymonds, REAL HARD (run by Oakland Kids First) has programs at Oakland Tech,Oakland High, Street Academy, Fremont, Castlemont and Skyline. In the past, REAL HARD has tackled issues such as bullying and classroom etiquette. Participants are paid a stipend of $350.

“We amplify the school culture and promote respect in how we treat one another,” says Krish de Leon, REAL HARD program coordinator, who leads the group at McClymonds. “We work with students and teachers to create an environment of learning and free expression.”

Shamorra Washington, 16, dangled her plastic wristband after admitting to sometimes getting emotional in her discussions with fellow students. “I know there is a way to be more respectful and I want to be heard and respected, too.”

Even students who did not participate in the REAL HARD action said they felt that promoting respect at McClymonds was worthwhile. “It’s a positive step,” said Deshawn Nelson, 16. “I like the idea of speaking my mind, being part of the community, being heard and yes, listening to others.”