The subject is personal, the perspective is introspective and the filmmakers are a 13-year-old from Bayview and McClymonds alum, Bonita Tindle, now a film student at San Francisco State.

The poignant video, “That Family Thing”  which explores Bonita Tindle’s experiences from foster care to rediscovering her own family, was selected as one of twelve finalists in a Project YouthView, a Bay Area competition that creates a venue for youth to tell their stories.

One of the more poignant moments comes as Tindle describes reading Harry Potter and waiting for the letter from Hogwart’s to arrive.

This is not Tindle’s first video. Three years ago, she made the finals with her fanciful video, “Dancing Robots, which followed a man’s  dreary robotic routine at work. All that changes when the man meets another man who plays music in the elevator and then exits on a floor where everyone is happy.

The video will be shown May 2 as part of Alternatives in Action’s 10th annual, a one-of-a-kind youth film festival now held at the Paramount Theater in downtown Oakland.

In a mock interview while still at McClymonds, Tindle said her biggest challenge as a filmmaker was “carrying around 120 pounds of equipment on BART, boom lights, tripods and cameras”

The 12 selected youth-created films were chosen through a competitive process by industry and community judges from over 45 pieces submitted by youth throughout the Bay Area.

Information and Tickets available at www.alternativesinaction.org

Why I miss San Francisco 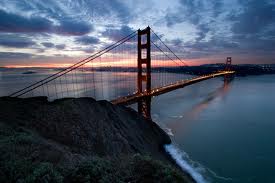 I miss the views. Stunning vistas, dotted hills, the blueness of the Bay, Ocean Beach with its limpet shells and sand dollars.

And then there’s the mobility of living in San Francisco: the buses are cheaper and it feels safer, less violent.

On a typical morning on Potrero Hill, I could jump out of bed and race down the street to Potrero Hill Neighborhood House to take a Zumba class. It’s high energy dance with samba music, Latin jazz, Cupid shuffle. Cafés like JB’s Place open in the wee hours. People mill around Safeway on 17th and Potrero street.

My neighborhood in north Oakland (ice city: “we ain’t no squares we polar bears” Mistah Fab) is less lively and more dangerous. There’s a gang injunction that limits the freedom of lots of youths and people in their 20s in your neighborhood.

My job in San Francisco was where I danced — helping people do the homework and teaching hip hop dancing. I combined strong academics — I don’t even have Spanish this year. And although the pay is the same, my after-school job in the East Bay is in San Leandro, an hour and a half from my house.

It’s fun living in north Oakland, but I also miss all of  my friends and family, and on top I miss being in the hood. I miss going everywhere and knowing everybody. 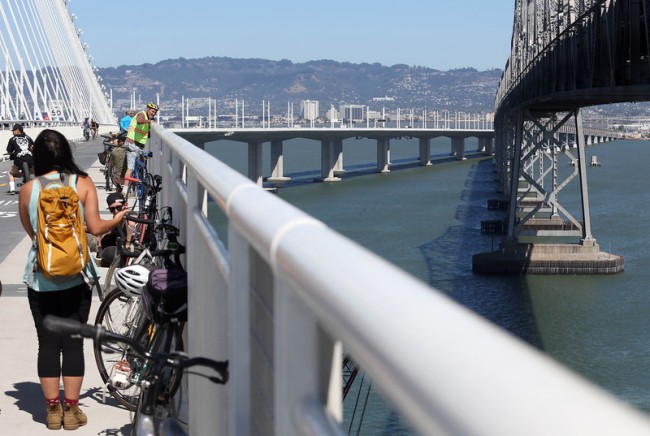 photos and story by Luckie Lovette

They stroll, skate, cycle and stare.

For the first time in 76 years, the Bay Bridge is now accessible to pedestrians and bicyclists.

“I went in through the Burma Road path in West Oakland and  it took 20 minutes to walk from the entrance to the Oakland touchdown,” says McClymonds senior Aronisha Smith. ” I was tired when I made it halfway, but it was a beneficial walk that made me healthy.”

The new east span of the bridge, which had a piece collapse in the Loma Prieta earthquake in 1989, opened three weeks ago. Since then, thousands of people, including residents of West Oakland, have walked over, and were captivated by the breathtaking views of cranes, the old bridge and the water.

There are two lanes for bicycles and one lane for pedestrians. The views are amazing, but riders should be warned that the path is not for the unconditioned heart; the trek is entirely uphill from Oakland going to Yerba Buena Island.

“It would be a pretty long walk if you’re not biking,” said McClymonds alum Paige Seymore.

Oakland city leaders and transit officials unveiled the green-and-white sign at the entrance of the path bearing the name of late city planner and longtime bicycle advocate Alexander Zuckermann.

Zuckermann founded the East Bay Bicycle Coalition in 1972 and lobbied the Metropolitan Transportation Commission for years to bring greater bike accessibility to Oakland and other parts of the Bay Area. 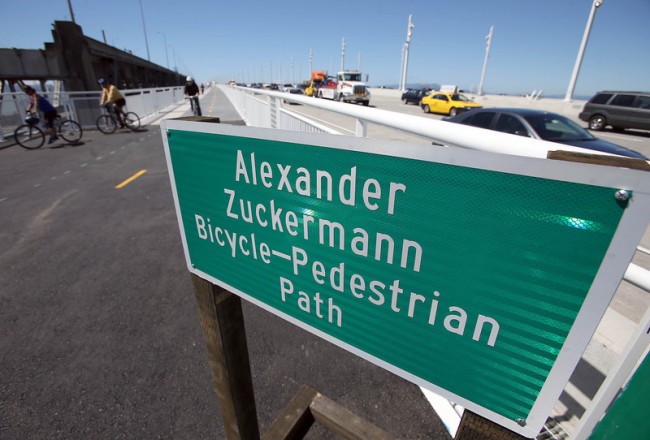 One unique feature is that the bike path hangs slightly away from the bridge, with a vent to draw away exhaust from passing cars. While you might want to make your way to Yerba Buena Island and/or Treasure Island, you will have to wait until after the bridge bike and pedestrian lane opens.

Some bicyclists are asking why the path doesn’t continue all the way to San Francisco. The Bay Area Toll Authority is looking at that very idea, with a study due out later this year.  Design chief Steve Hulsebus said the bike path’s connector can’t be completed until the infamous “S-curve” is demolished in 2015.

“We’re gonna get people halfway to Yerba Buena Island from Oakland.  The real goal is to get all the way to San Francisco from Oakland. Then it can be a transportation facility and not just a recreational bike path,” Hulsebus said.

Much of the $500-million price tag  to finish the rest of the new bike path will likely come from higher bridge tolls, putting any dreams of biking to San Francisco nearly decade away.

Is it worth the wait? Some of its new admirers think so. “It would be cool to be able to walk to Yerba Buena Island,” says McClymonds physical education teacher Jeremy Namkung, who has not yet walked the bridge. “Although, I would be more eager if it connected all the way to the city (San Francisco).” 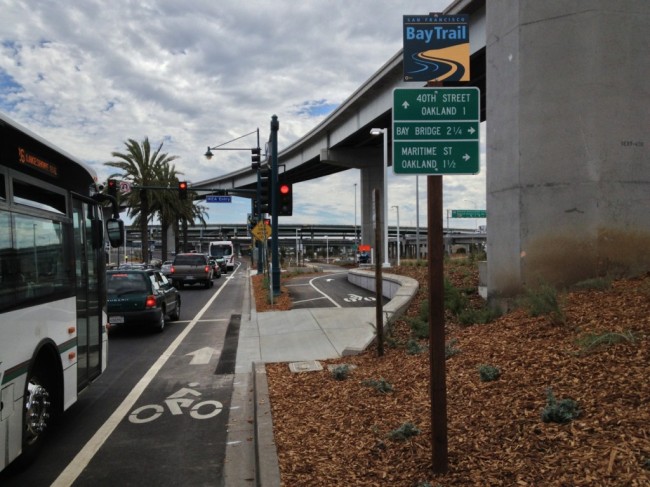 2 Chainz aka No Chainz 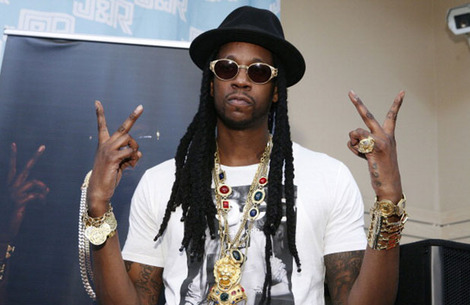 Billboard Magazine, citing police reports, said that the rapper, born Tauheed Epps, was walking with five members of his entourage in downtown San Francisco before a performance at the summer jam concert in Oakland. Three men, one with a gun, approached the group.

One shot was fired, and the gunmen reportedly made off with Epps’ wallet and cellphone, fleeing in a gray sedan.

On Twitter, Chainz seems to be denying that much of an incident took place, saying, “Rule #1 if a rapper gets robbed people usually post items that has been taken. Rings, chains, watch, money etc. 2 answer that question…Rule#2 if a rapper gets shot he usually go to hospital or dies.”

The stories buzzed the night it happened and some fans feel mad that he was robbed in the Bay.

“My first reaction was to laugh.  It was so surprising and sad— but at least it didn’t happen in Oakland,” said sophomore Kardel Howard.

According to reports, as officers responded to the call, the rapper told the police that he would handle the situation himself. His entourage was seen fleeing the scene -all of which was caught on camera.

Sources say his friends “ran away from the incident like cockroaches running from a flashlight.”

One Instagram user and apparent blood gang member posted an image to his account with the caption:

“2 Chainz got his cornball a** stripped in the city.”